The armed forces are losing around 30 troops a day compared to 100-200 previously, the Ukrainian president claims 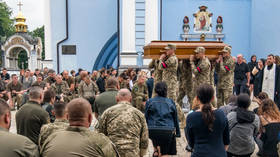 Ukraine’s combat losses have decreased to around 30 fatalities a day from the previous 100-200, President Vladimir Zelensky told the Wall Street Journal.

In an interview published on Friday, Zelensky said he always knows the exact numbers because he lives with this “every day.” Checking his smartphone for the latest figures supplied to him by the military, Zelensky said that at the peak of the fighting in May and June, Ukraine was losing 100-200 troops a day, while now it’s around 30 soldiers killed per day and around 250 injured.

The president, citing military policy, refused to disclose the country’s total military losses since the beginning of the Russian military operation, but claims that the figure is a few times lower than Russia’s. Moscow’s assessment of the numbers is the opposite. 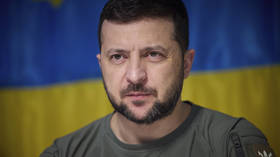 Zelensky partially attributed Ukraine’s supposed success to the Western weapons being sent to the country, particularly to the HIMARS multiple-launch rocket systems and howitzers.

Moscow has consistently warned the West against providing Kiev with weapons, saying it would only lead to unnecessary casualties and would not prevent the Russian military from achieving its goals.

On July 4, Russian Defense Minister Sergey Shoigu announced that over the previous two weeks alone, Ukraine had lost almost 5,500 troops, including over 2,000 killed.

Regarding its own military casualties, Moscow has not been updating the numbers since March, when it reported 1,351 military personnel killed.

In June, the head of the Russian Duma’s Defense Committee, Andrey Kartapolov, claimed that, due to changes in military strategy, the Russian Army has “practically ceased to lose people.”