The Chinese currency outperformed the euro by volume of trading, but comes in second after the US dollar 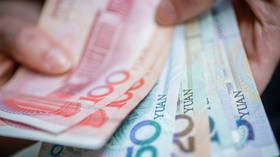 The Chinese currency the yuan outperformed the euro by trading volume on the Moscow Exchange (MOEX) for the first time on record, trading data from Friday shows.

The yuan failed to overtake the US dollar, however, with Friday’s greenback trading volume reaching 124.7 billion rubles ($2.1 billion).

Analysts suggest the growth in the yuan’s trading volume on MOEX stems from banks’ devaluation actions and speculation on currency interventions, which may take the form of yuan purchases as part of Russia’s much anticipated new budget rule. 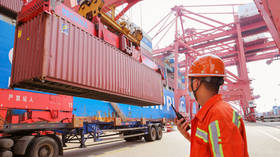 The rule has not yet been approved, but the Bank of Russia has already allowed non-resident banks from “unfriendly” countries to trade one foreign currency in exchange for another on Russian foreign exchange markets. The volume of dollar-yuan transactions on MOEX, consequently, set a new historical record on Thursday, reaching 38.4 billion rubles.

However, Western anti-Russian sanctions also contribute to the yuan’s appeal, analysts say. Due to sanctions, bank clients are seen gradually switching from currencies of “unfriendly” countries, primarily the US dollar and the euro. Nikita Silkin, head of the online broker BCS Global Markets, told newspaper Kommersant that the trend is obvious, both among individuals and legal entities, with importers forced to switch to conducting transactions in currencies that are not influenced by sanctions. Another expert, Viktor Tunev, chief analyst of Ingosstrakh-Investment Management Company, told the news outlet that the interest of Russian residents in the yuan is natural, as buying dollars or euros is currently both risky and costly.