The weapon that can hit a target more than a mile and a half away was fired near Kiev, according to Russia's Tass news agency 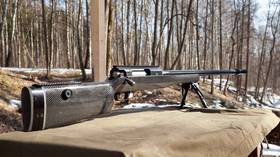 Snipers used the rifle near Kiev, as well as near Kharkov in eastern Ukraine, but “rarely” because it was not always possible to find suitable terrain, the source told the Russian news outlet. There has been no official confirmation of the information, the agency added.

The single-shot bolt action weapon, designed in 2012 by Russian firm Lobaev Arms, the SVLK-14S Sumrak can effectively hit targets at a range of up to 2,700 meters (1.6 miles), according to the manufacturer.

In 2020, Britain’s Daily Mirror newspaper described the Sumark as “the world’s most deadly sniper rifle,” noting that it has nearly double the effective range of the L115A3, the British Army’s sniper rifle.

In 2017, a bullet from the Sumrak traveled 4,210 meters (2.6 miles) before hitting a target at a shooting range in Russia, which reportedly set a world record.