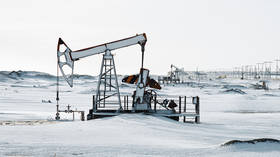 The Russian government has issued an order for the shares held by Norway’s energy company Equinor and France’s TotalEnergies in a major oil field, to be transferred to the project’s operator, state-run Zarubezhneft.

The European companies decided to pull out of the Kharyaga oil project due to international sanctions against Russia. Equinor held a 30% stake in the field, and Total owned 20%. The terms of the equity transfers have not been disclosed.

Both firms had been part of the Kharyaga onshore oil development, located in Russia’s Arctic, for over 20 years. It is one of three production sharing projects in Russia, with two others – Sakhalin 1 and Sakhalin 2 – operating larger offshore oil and gas deposits near Sakhalin Island in Russia’s Far East.

Zarubezhneft will now hold a 90% stake in Kharyaga, with locally owned Nenets Oil holding the remaining 10%.

Other Western energy giants, including Shell, BP and ExxonMobil, have also left Russia in recent months due to sanctions.