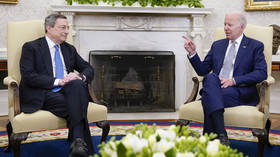 Italian Prime Minister Mario Draghi said on Wednesday that he discussed setting up a “cartel” of oil buyers in order to persuade the OPEC countries to produce more oil, as well as imposing price caps on oil and gas, when he met with US President Joe Biden.

Draghi told reporters that he and Biden shared a “dissatisfaction” with how global energy markets were structured and discussed the “general concept” of capping both oil and gas prices, when they met on Tuesday.

“We are both dissatisfied with the way things work, in terms of oil for the US and in terms of gas for Europe,” Draghi told reporters in Washington. “Prices don’t have any relationship with supply and demand.”

Capping gas prices would “reduce the financial help we are giving to [Russian President Vladimir] Putin to continue the war” and make use of Europe’s “market power,” Draghi said, adding that the “same thinking could be applied to oil at a global level.”

“The idea is to create a cartel of buyers, or to persuade the big producers, and OPEC in particular, to increase production, which is perhaps the preferred path,” Draghi said, though he admitted there wasn’t unanimous support for such thinking in the EU itself. 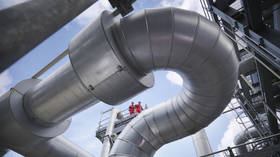 Prior to the outbreak of hostilities in Ukraine in February, Italy imported around 40% of its natural gas from Russia. For the EU as a whole, that figure was closer to 45%. Draghi is now working to find other suppliers, signing a deal with Algeria earlier this month.

“Diversification is possible and feasible in a relatively short time, shorter than we imagined just a month ago,” he told the Italian daily Corriere della Sera in an interview published on Sunday.

However, Draghi also acknowledged that “most gas importers have already opened an account in rubles with Gazprom,” accepting the new terms of delivery Moscow implemented in response to the US-EU embargo. An EU attempt to ban imports of Russian oil and gas entirely has run into opposition from Hungary, Czechia and Slovakia this week.

The Organization of the Petroleum Exporting Countries (OPEC) has so far declined repeated demands from the US and its allies to ramp up oil production in order to offset their embargo against Russia. Washington has reached out to Iran, Venezuela and most recently Brazil with requests for more oil, only to be rejected. All previous attempts to organize oil buyers as a counterweight to OPEC’s bargaining power have failed.