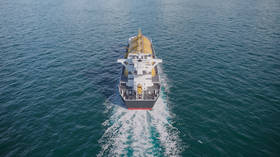 “Today, Mozambique enters the annals of world history as one of the exporting countries of LNG,” Nyusi said in a video statement, as cited by AFP news agency.

The plant is managed by Italian company Eni, and according to Nyusi, the shipment was ordered by British oil major BP.

Mozambique has the largest natural gas deposits south of the Sahara Desert, holding roughly 2.8 trillion cubic meters of proven reserves or around 1% of the world’s total. They were discovered in the country’s northern Cabo Delgado province in 2010. Estimates show that given the extent of the deposits, the country could become one of the world's 10 biggest LNG exporters. According to data from Statista.com, Mozambique could also become Africa’s third largest exporter of the fuel after Algeria and Nigeria.

Coral Sul can produce 3.4 million tons of LNG per year. However, the plant is the only one of three large energy projects in Mozambique currently in operation. The remaining two, operated by France’s TotalEnergies and US oil giant ExxonMobil, have been halted due to political instability in the country.

Eni's CEO Claudio Descalzi welcomed the first gas shipment from Coral Sul, calling it a “significant step forward” in the company’s work “to leverage gas as a source that can contribute in a significant way to Europe's energy security, also through the increasing diversification of supplies.” Securing energy supplies has become a key focus for the EU this year, due to a plunge in gas imports from the bloc’s former main supplier, Russia.