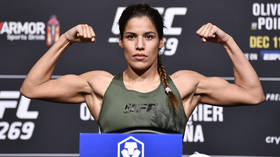 Reigning UFC bantamweight champion Julianna Pena has predicted that MMA fans are "going to see whose ovaries are bigger" when she takes on Amanda Nunes for the second time at UFC 277 on Saturday.

The 'Venezuelan Vixen' pulled off what is considered one of the biggest upsets ever seen in the elite promotion when she submitted the Brazilian believed to be the greatest female fighter of all time in the second round at UFC 269 in December last year.

Afterwards, there was also a row when Pena commented that she should be handed a 'Baddest Mom on the Planet' belt and claimed to be the first 'mom champ' due to Nunes not giving birth to the near-two-year-old child, Raegan, that the Brazilian shares with her wife Nina.

Seven months later, Pena is set to defend the 135lbs strap for the first time in Dallas. Yet rather than sitting on the back foot and attempting to cruise to a decision as champions often do, the 32-year-old has vowed to take the action to her opponent.

"At the end of the day, Amanda and I are the two best fighters in the world," Pena highlighted at the UFC 277 media day on Wednesday.

"You’re literally getting the two best fighters in the world that are going to collide on Saturday night.

"I’m willing to bet that that’s me," she boldly predicted.

As recently seen with featherweight king Alexander Volkanovski, who defeated the division's former ruler Max Holloway for a third time at UFC 276, it is thought that Pena beating Nunes on a second occasion would bookend their rivalry and lead the American to new horizons. 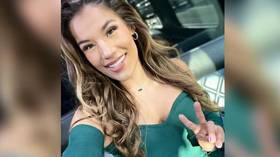 Pena is ready to move on too, but still isn't taking the 'Lioness' lightly and looking beyond their headline bout on Saturday in the American Airlines Center.

"The torch was passed," Pena claimed. "I snuffed it out. I’m ready to close this chapter, and I’m ready to move forward. With that being said, it’s hard for me to predict what’s in the future and what’s going to happen.

"I just want to live presently at the moment, and presently I have a bigger, faster, stronger, new gym, better mental-state Amanda that’s going to be facing me on Saturday night, and I don’t take that lightly," Pena concluded.

As for Nunes, who has now switched gyms from American Top Team to one of her own in Florida, as Pena indicated, she insists that "a lot of things went wrong in my camp" leading up to the first Pena encounter.

"I made a mistake, a huge mistake," Nunes confessed to ESPN this week.

"A lot of things went wrong in my camp, and I still moved forward with the camp. I didn’t want to let the fight fall through. Nina [Nunes] was trying to tell me like, ‘Listen, if we have to pull out of this fight to get 100 percent, we can do that.’ But I didn’t listen to her. I wanted to fight," she added in reference to her wife. 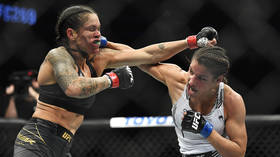 "So that pressure to not fight once again and then [if] the UFC put an interim belt and that was giving me a hard time to let that fight go. So I didn’t think that would’ve been right for me to let an interim belt be put out there.

"And because of that, I decided to fight. But a lot of things went wrong, I had a hard time to keep training. Sometimes we [make] mistakes and I paid that night. It is what it is. Sometimes you get things wrong to get things right the next time," Nunes pointed out.

Despite being dethroned by Pena at bantamweight, Nunes still reigns supreme at featherweight and may look to defend the strap there regardless of the outcome against Pena at the weekend.