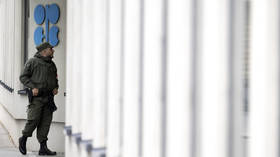 The White House is desperately seeking a way to prevent a major cut in oil production, which is expected to come after a meeting of OPEC+ member states in a move that is certain to send prices at the pump surging, CNN reported late on Tuesday.

Washington has mobilized all available human resources in the administration, with the White House “having a spasm and panicking,” an unnamed senior official told the media, describing these latest efforts as “taking the gloves off.”

The size of the reductions has yet to be agreed at Wednesday’s meeting of OPEC members and other producers at the cartel’s headquarters in Vienna. Moscow and Riyadh are pushing for cuts of two million barrels per day or more, with these likely to be phased in over several months, the Financial Times reported, citing people with knowledge of the discussions.

If agreed, this would be the biggest cut in oil output since the beginning of the Covid-19 pandemic, when lockdowns slashed demand across the world. The drastic step by OPEC+ is expected to lead to a dramatic spike in global crude prices.

According to CNN, some of the talking points drafted in a state of urgency by the White House suggested the potential cut would be viewed as “a hostile act” and a “total disaster.”

“There is great political risk to your reputation and relations with the US and the West if you move forward,” the media quoted the talking points draft as saying.