The 'Black Beast' Derrick Lewis made his comments earlier this week 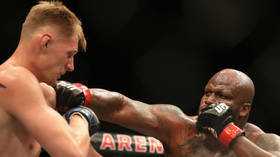 The manager of UFC heavyweight star Alexander Volkov has laid into the fighter's former octagon rival Derrick Lewis for comments he made about supposed racism in Russia.

Knocking Volkov out in the third round of their 2018 meeting, Lewis is set to take on another Russian in 15-1 Sergei Pavlovich at UFC 277 in Dallas on Saturday.

At a UFC media event during fight week, Lewis gave an interview where he talked about making changes to his camp and remarked on often being asked where he got his ring name 'The Black Beast' from.

"I always think it’s a set-up, every time they ask me that," Lewis said.

"Especially from a foreign country, because they automatically think it’s racist. I try not to feed too much into that. Already from Russia, Germany, they are born off the swastika," he boldly claimed.

Broached on these comments by Match TV, Volkov's manager Ivan Bannikov noted that Lewis had said a "terrible thing".

"If he had a different skin color, he himself would have been destroyed for racism. But it turns out that he can afford to blame everyone around [him] for racism," Bannikov added.

Coming off a KO loss to Tai Tuivasa at UFC 271, fifth ranked Lewis will be nearing the Last Chance Saloon with another defeat to Pavlovich which would be his third in his last four fights.

Though he lost in his UFC debut to Alistair Overeem, Pavlovich is currently on a three-fight winning streak and should relish the chance to break into the top five. 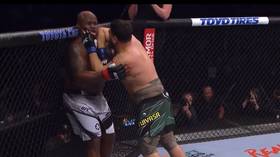 If ex-light heavyweight and heavyweight champion Daniel Cormier's words are anything to go by, Pavlovich could be in for a rough ride.

Now retired and working as a pundit, Cormier told Lewis this week that he had "never been hit harder in my life" than when 'DC' beat him in a championship fight in November 2018 following Lewis' Volkov victory.

Cormier won that one via a rear-naked choke submission, and the closest Lewis has since come to getting a shot at current heavyweight king Francis Ngannou, who Lewis himself once topped via a unaimous decision, was when he faced Ciryl Gane for the interim title last August but was stopped in the third round at UFC 265.