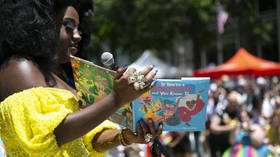 A video depicting a drag queen clad only in spangled panties and a body harness leading a young girl adorned in a tiara around a bar has elicited outrage and demands for legal action from viewers after the clip went viral over the weekend.

“These people belong in jail,” conservative pundit Lauren Chen tweeted on Saturday in response to the video, adding that the issue was a “hill [she was] willing to die on.”

The footage shows the unnamed performer strutting around Miami’s R House Wynwood restaurant, G-string stuffed with cash and enormous breasts bared, hand-in-hand with the child – who was apparently also deputized to collect cash tips from patrons.

It was posted to TikTok by user @nononoie, who captioned it “children belong at drag shows!!!! children deserve to see fun & expression & freedom.” The user has since locked the account, according to the Daily Mail.

Numerous other commenters piled on the video after Chen drew attention to it, demanding Florida Governor Ron DeSantis “prove [his] worth” and “make sure this person gets arrested and the venue is shuttered.”

“These people deserve jail and eventually hell,” another user tweeted.

R House Wynwood advertises “drag extravaganzas” three days a week. The menu for its “drag brunch” is explicitly child-friendly, with a “kids brunch” option for children under 12 years of age that includes two food items, a non-alcoholic beverage, and “of course our fabulous show.” It’s not clear if the video of the drag queen with the little girl was shot at one of these brunch events, but the patrons’ lack of reaction to the child with wads of cash in her hands suggests that she was not the only youth present.

A growing number of American parents have publicly expressed revulsion at the trend of drag shows aimed at children, from library ‘drag queen story hours’ to actual child drag queens such as Desmond Is Amazing and Lactatia. Many see the events as examples of grooming by pedophiles – a perception that isn’t helped by the fact that several drag queen story hour performers have been revealed to be convicted sex offenders. In one particularly egregious case last week, drag performer Brice Patric Ryschon Williams, who has danced for children, was charged with 25 counts of child pornography in Pennsylvania.

The state of Florida recently adopted a law banning age-inappropriate teaching of material related to sexual orientation and gender ideology in schools from kindergarten through third grade. However, this does not govern extracurricular events such as drag queen story hours or drag brunches, and it’s not clear what law the many outraged parents responding to the Miami viral video expect DeSantis to enforce.