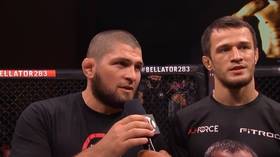 Usman Nurmagomedov edged closer to matching cousin and cornerman Khabib's 29-0 legacy by making short work of Chris Gonzalez at Bellator 283 on Friday to improve to 15-0.

In his fourth fight for the promotion, Nurmagomedov needed just under three minutes to figure out Gonzalez and end the American with a guillotine choke in Round 1 of their meeting at the Emerald Queen Casino in Tacoma, Washington.

Given that Tofiq Musayev defeated previous top challenger Sidney Outlaw elsewhere on the card, Nurmagomedov is now the number one contender in the lightweight division and made it clear that he wants to dethrone champion Patricky Pitbull after cousin Khabib again guided him to another impressive victory.

"I don't want to talk too much, I know the champion is injured," Usman said through his translator Khabib, with Pitbull having pulled out of his title defense against Outlaw that was meant to be the main event.

"When you're going to be ready let me know, I want to fight for the title," he added.

Judging by comments Khabib made before the fight, he clearly thinks Usman is ready too.

"Now he is coming into his own," Khabib claimed to Sports Illustrated. "He is getting better every fight, and I think he is at 50 percent of his potential and he is going to be the future Bellator champion."

"My family name, it isn’t pressure," Usman insisted during the same sitdown chat.

"Khabib’s always in my corner. I feel good when he’s there. It’s motivation.

"With my family, I have the strongest corner in the sport. I have to represent our family on the highest level. That is what I plan to do," he went on.