The majority does not think the current president should seek a second term, a new survey shows 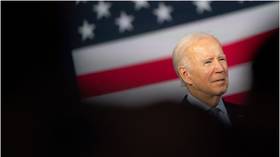 More than two-thirds of voters for US House of Representatives candidates do not want President Joe Biden to run for re-election in 2024, according to the early results of an exit poll conducted by Edison Research and reported by CNN.

Fewer than six out of ten Democratic voters said that Biden should seek a second term. Roughly nine in ten Republican voters and more than seven in ten independent voters said they do not want him to run again.

Biden’s approval rating fell to 36% in July, his lowest since becoming president. A Reuters/Ipsos poll had him at 39% on Monday, a day before the midterm elections.

Biden was elected president in 2020, beating the incumbent, Donald Trump. Biden’s performance ratings have been marred by the high inflation rate and soaring gas prices, among other issues.


READ MORE:
Republicans favored to retake US House, as Senate up for grabs

Some Republicans have also criticized Biden for writing “blank checks” for Ukraine amid its conflict with Russia, while urging him to focus on the economy and other domestic affairs.