Half of the G20 nations have not supported the sanctions 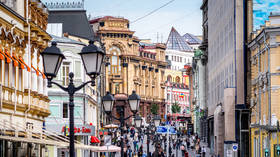 The US-led drive to isolate Russia through sanctions has not succeeded, as half the countries in the Group of Twenty leading global economies refused to sign on, Bloomberg reported on Friday.

According to the publication, senior officials from leading Western nations are surprised by the lack of support within the wider G20, despite their efforts to make the case for restrictions against Russia.

Argentina, Brazil, China, India, Indonesia, Mexico, Saudi Arabia, South Africa, and Turkey have not joined the sanctions that were adopted by the US, UK, EU, and their allies Australia, Canada, Japan, and South Korea. Some nations, like China and South Africa, have openly criticized the restrictions. The G20 nations account for around 85% of global economic output.

According to Bloomberg, the reasons for the lack of support include strong trade ties, historical affinities to Moscow, and a distrust of former colonial powers.