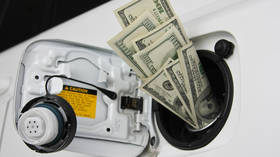 The cost of gasoline at petrol stations across the United States hit a new all-time record on Friday, according to the American Automobile Association (AAA).

The highest gasoline prices in the country have traditionally been found in the state of California, where motorists will have to pay an average of $5.872 per a gallon of fuel.

Gasoline prices in the US have been steadily rising throughout the week. The increase comes against the backdrop of rising global oil prices, with attempts by the White House to counter them failing.

Global fuel stockpiles have been dwindling as demand recovered to pre-Covid-19 pandemic levels, while production has not yet been able to catch up. The Ukraine crisis, which prompted the US to place an embargo on Russian oil and sparked talk of similar measures in the EU and the UK, have also been adding the proverbial fuel to the fire. Russia is the world’s third biggest oil producer and second biggest exporter.