US gasoline prices double under Biden 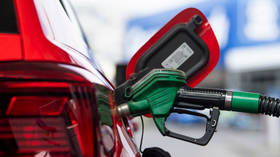 US gasoline prices have once again refreshed all-time highs, reaching $4.81 per gallon on Saturday morning.

According to data from the non-profit American Automobile Association (AAA), which tracks prices at more than 60,000 gas stations across the country, prices have now doubled since US President Joe Biden was inaugurated. At the end of January 2021, during the first week of Biden’s presidency, a gallon of gasoline cost only $2.39.

The highest gasoline prices in the country are traditionally recorded in the state of California, where motorists now have to pay an average of $6.29 per gallon.

US fuel prices have been setting new records for four weeks now. The first surge came at the end of winter, when Russia launched its military operation in Ukraine, and Western states responded with sanctions, which put the global supply of Russian energy in jeopardy.

Washington placed an embargo on Russian oil earlier this spring. Despite Russian supplies only having covered 8% of US imports, gasoline costs have been climbing as oil prices surge globally.

During a speech at the White House on Wednesday, Biden said that the US administration is unlikely to be able to sufficiently reduce the cost of gasoline in the country in the short term, despite its efforts.