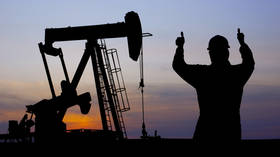 Washington will allow some transactions “related to energy” with Russian entities to continue until May 15 next year, according to an updated general license published on the US Treasury department website on Thursday.

The list of entities with which transactions will be allowed includes major Russian banks, including Sberbank, Otkritie, VTB, Alfa-Bank and the Central Bank of Russia.

The Treasury explained that authorized transactions will cover those connected with the extraction, production, refinement, transport, or purchase of petroleum, including crude oil and petroleum products, and natural gas, as well as other products “capable of producing energy,” such as coal, wood, or even agricultural products used to manufacture biofuels.

The move comes weeks before the previous general license is set to expire. It is also less than a month before the US-pitched Group of Seven (G7) price cap on Russian oil is scheduled to come into force, along with an EU embargo on Russian seaborne crude.

The US banned imports of Russian fossil fuels earlier this year, but has so far refrained from banning energy-related bank transactions with Moscow.