US consumer prices continue to soar 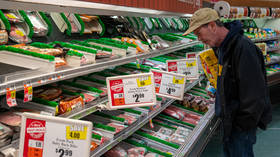 Consumer prices in the US surged once again in October, rising at the fastest annual pace since the 1980s, as inflation continues to expand across more sectors of the economy.

Ahead of the Consumer Price Index (CPI) report to be published by the Bureau of Labor Statistics, analysts expect the October CPI to rise 0.6% from September, up 0.4% from last month’s figure. The annual pace, however, is projected to slow to 7.9% from 8.2%, and a reported 40-year high of 9.1% in June. It would be the first time the yearly rate has fallen below 8% since February, according to media reports.

Overall inflation for goods, excluding food and energy, rose by 0.5% to an annual pace of 6.5%, lower than the 0.6% gain in September, and costs of services have sped up to a 6.7% annual pace from less than 4% at the end of 2021, driving wages up and adding to inflation pressures.

Blerina Uruci, the chief US economist at T. Rowe Price, expects a decline in core inflation, but says that growing prices have undermined consumer demand. “Some of it is coming from goods prices because there’s a slowing in demand as we’ve seen in consumer spending recently. It’s some small progress that increased inflation can eat itself up in a way,” she said.

The CPI is a key report for the Federal Reserve, which is expected to raise interest rates by another half of a percentage point in December. Analysts expect the final rate may reach 5% next year and will be well above the targeted 4.6% predicted in September by Fed officials.