US becomes global leader in LNG 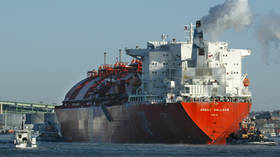 The United States became the world’s largest exporter of liquefied natural gas (LNG) in the first half of 2022, the US Energy Information Administration reported on Monday.

Exports rose by 12% in the first six months of 2022 compared with the second half of 2021, the EIA said, citing data from CEDIGAZ, the International Association for Natural Gas. This helped the United States to beat Australia and Qatar, the other two leading LNG exporters.

Outlining reasons for the increase, the EIA cited soaring natural gas and LNG prices, as well as rising global demand – particularly in Europe.

Since the end of last year, countries on the continent have increased their LNG imports to compensate for lower pipeline supplies from Russia and to fill natural gas storage inventories that are at historically low levels, the EIA explained. The EU and the UK ramped up their LNG imports by 63% in the first half of this year, and just over 70% of American-produced LNG went to the EU and Britain, the agency added.

Russia’s Energy Ministry said in May that American liquefied natural gas is at least 30-40% more expensive than Russian pipeline gas.