Manchester United expect the Portuguese star to remain at the club because of a lack of suitors, a report has claimed 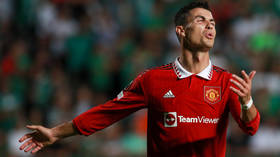 Cristiano Ronaldo is set to remain at Manchester United at least until the end of the season because of a lack of potential buyers for the 37-year-old forward, according to ESPN.

Ronaldo attempted to engineer a move away from Old Trafford before the start of the current campaign as the striker went in desperate search of Champions League football.

But following rejection from the likes of Chelsea and Bayern Munich, as well as Ronaldo himself turning down a lucrative offer from Saudi Arabia, the five-time Ballon d’Or winner remained stuck at United.

According to ESPN, United do not expect Ronaldo to leave once the transfer window reopens in January, primarily because of a lack of suitors.

The outlet describes the situation as leaving the “unwanted” former Real Madrid star as being “in limbo.” 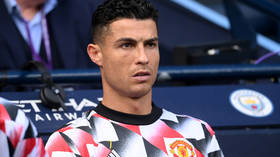 It was previously reported that manager Erik ten Hag would be willing to let the forward leave in January, although the issue for Ronaldo now appears to be finding a suitable landing spot rather than convincing United to part ways.

The Portuguese star is currently serving the last year of the deal he penned when returning to United from Juventus in 2021, with the option of a one-year extension which seems highly unlikely.

Dutch manager Ten Hag has used Ronaldo sparingly this season, restricting him to just 207 minutes of action in the Premier League – where he is yet to score this campaign – and mainly utilizing him in Europe.

Ronaldo’s solitary strike this season is the penalty he scored against FC Sheriff Tiraspol in the UEFA Europa League.

The number seven played the entirety of the European game at Omonia Nicosia in Cyprus on Thursday night, but spurned a glorious chance for a landmark 700th club career goal when he could only direct a cutback onto the post, despite being just six yards out and with the goal at his mercy.

The moment summed up a frustrating night for Ronaldo even though United escaped with a 3-2 victory thanks to a double from Marcus Rashford and a goal from Anthony Martial.

United are next in action when they travel to Everton in the Premier League on Sunday, when Ronaldo will be tipped to start on the substitutes’ bench once again, judging by Ten Hag’s recent treatment of the Portuguese superstar.