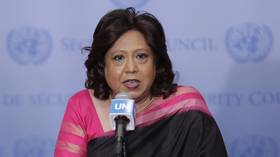 The UN special representative on sexual violence, Pramila Patten, has admitted she possesses no solid evidence that would substantiate her earlier accusations against Russia in a mock call with pranksters Vovan and Lexus. Last month, Patten claimed that Russian soldiers used mass sexual assault as part of a military strategy in Ukraine.

“This is the information, which I got when I was in Kiev on May 3 from survivors and service providers,” she can be heard saying in a video published by the Russian prankster duo on Thursday. Vovan and Lexus posed as Alexander Merezhko, the head of the Ukrainian parliament’s Foreign Affairs Committee. According to Patten, the “service providers,” who “reported” this information to her, were carrying out “door-to-door” enquiries and were particularly “referring to Mariupol.”

The Azov Sea port city of Mariupol was already largely controlled by Russian forces in early May, with some of the Ukrainian troops still holed up at the Azovstal steel plant. Russian military allowed the UN and the International Committee of the Red Cross to evacuate civilians from the city but there were no reports about any Ukrainian “service providers” carrying out any “door-to-door” enquiries there. 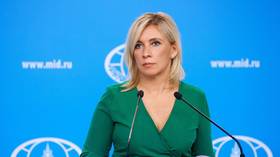 Patten also insisted that this information was relayed to her in the presence of Ukraine's European Integration Minister Olga Stefanishina.

When asked by Vovan and Lexus on whether she was provided with any evidence to substantiate these reports, Patten said it was “not her job” to conduct any investigations altogether. The UN official admitted she was just “sitting in New York” and providing “strategic leadership.”

“It’s not my role to go and investigate. It’s not the role of my office,” she told the prankster duo, adding that she does not have a relevant mandate either. Patten then said that the investigation was being carried out by the UN Human Rights Monitoring Mission in Ukraine. She admitted, though, that their reports did not mention anything “about Viagra.”

In October, Patten claimed to the AFP that sexual violence was a “deliberate tactic” and “military strategy” of Russia, adding that the soldiers were “equipped with Viagra.” Her words sparked a response from Moscow, as Foreign Ministry spokeswoman Maria Zakharova blasted Patten’s claims as going “beyond the reach of reason.”