With Israel’s missiles hammering Gaza, the country’s ambassador has accused the UN of being soft on terror 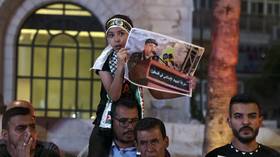 Israeli ambassador to the UN Gilad Erdan accused the organization of “making false immoral comparisons” between Israel’s military and Palestinian “terrorists,” after it expressed “deep concern” over Israel’s assault on Gaza. While the Israeli offensive took out senior terrorists, Palestinian officials say dozens of civilians were killed or injured.

UN Middle East envoy Tor Wennesland issued a statement on Friday saying he was “deeply concerned about the ongoing escalation between Palestinian militants and Israel,” including the “targeted killing” of Palestinian Islamic Jihad (PIJ) commander Taysir al-Jabari in an Israeli airstrike earlier in the day.

Wennesland called on both sides “to avoid a further conflict which would have devastating consequences, mainly for civilians,” but Erdan took issue with his phrasing.

“While the Palestinian Islamic Jihad is launching missiles at Israeli civilians, the UN envoy expresses ‘deep concern’ for the neutralization of a senior terrorist behind an imminent attack on Israelis,” the ambassador wrote on Twitter. “Will he also express deep concern over the neutralization of al-Zawahiri?” he asked, referring to the al-Qaeda leader assassinated by the US last weekend.

“For how long will the UN continue making false immoral comparisons between a democracy that abides by international law, and designated terror orgs committing war crimes by deliberately targeting civilians?” he continued in a follow-up tweet, concluding that “these comparisons only incentivize terrorists to continue their attacks.”

The Israel Defense Forces (IDF) struck al-Jabari’s apartment block with a missile on Friday, kicking off what it called ‘Operation Breaking Dawn’. Strikes continued throughout the day, with the IDF targeting between 10 and 20 other PIJ operatives as well as the militant group’s weapons stores, observation posts and firing positions.

Palestinian officials say that at least ten civilians were killed in the strikes, among them a five-year-old girl. Another 55 were reported injured.

The PIJ responded by firing dozens of rockets into Israeli territory. The IDF claimed that most of the projectiles that made it past the Gaza-Israel border were shot down by the Iron Dome missile defense system, with the remainder falling on open ground. No Israeli casualties have been reported.

The latest escalation began when Israeli forces arrested PIJ’s West Bank leader, Bassem Saadi, in the city of Jenin on Monday. A Palestinian teenager was killed in the raid on Saadi’s home, triggering an outcry across the Palestinian territories. As the PIJ placed its fighters on high alert, Israeli officials repeatedly warned this week of impending revenge attacks.