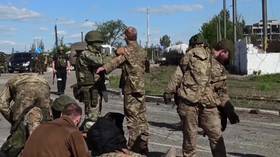 The last remaining Ukrainian troops in the southern port city of Mariupol have started surrendering, after being trapped for nearly a month in the Azovstal steelworks. The massive industrial complex, with a network of underground tunnels and bunkers, was the last bastion held by Ukrainian forces.

The city is otherwise controlled by Russian troops and the militias of the Donbass republics. The Donetsk People’s Republic (DPR) claims Mariupol as part of its sovereign territory.

Since the start of the week, over 250 Ukrainian fighters have surrendered to Russian troops in Mariupol, the Russian Defense Ministry reported.