Russia’s Defense Ministry says Kiev forces fired a barrage of missiles, including ballistic Tochka-U rockets, at the city of Kherson in southern Ukraine 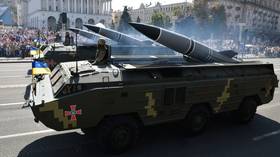 Russia’s Defense Ministry claimed on Thursday that Ukrainian forces fired more than a dozen missiles overnight at the city of Kherson in southern Ukraine, which was seized by Russian troops in early March. The ministry said in a statement that Russian air defenses intercepted the rockets.

According to Moscow, late on Wednesday the Ukrainian military launched at least two ‘Tochka-U’ ballistic missiles as well as 12 missiles from a high-powered multiple rocket launcher, apparently targeting residential areas of Kherson. The incoming rockets were, however, shot down by the Russian forces deployed in the city. A video released by the Russian Defense Ministry appears to show the aftermath of the shelling, with what looks like missile debris seen in the footage.

The ministry branded the attack a war crime, saying the “criminal, indiscriminate strike by the nationalists targeted residential areas along Ushakov Avenue, as well as nurseries, schools and other social infrastructure.” The attack represented a “direct violation of international humanitarian law,” the statement reads. 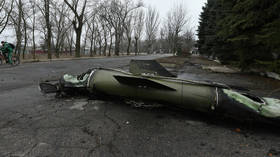 Earlier on Thursday, several Russian media outlets reported that the Ukrainian missiles targeted, among other things, a television tower, which relays Russian TV channels. Although the tower did not sustain any visible damage in the shelling, Russian channels went off air in the immediate aftermath of the attack, according to reports. Access to those TV channels has since been restored, according to Russia’s RIA Novosti news agency. According to initial media reports, a total of three ‘Tochka-U’ tactical ballistic missiles were fired, two of which ended up being intercepted by Russian forces.

The Ukrainian military has yet to comment on the incident.

Russian forces announced that they were in full control of Kherson on March 2, following a week of fighting.

Russia attacked Ukraine in late February, following Kiev’s failure to implement the terms of the Minsk peace agreements, first signed in 2014, and Moscow’s eventual recognition of the Donbass republics of Donetsk and Lugansk. The German and French brokered protocols were designed to give the breakaway regions special status within the Ukrainian state. The Kremlin has since demanded that Ukraine officially declare itself a neutral country that will never join NATO. Kiev insists the Russian offensive was an unprovoked act of war, and has denied planning to retake the two republics by force.