Ukraine sells billions in gold it may not have – Peter Schiff 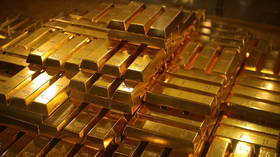 Ukraine’s central bank has sold $12.4 billion of gold reserves since February, Reuters has reported. However, a precious metals expert says the numbers don’t add up.
“We are selling [this gold] so that our importers are able to buy necessary goods for the country,” the agency quoted Katerina Rozhkova, first deputy head of the National Bank of Ukraine, as saying on national television on Sunday. The gold was not being sold to support Ukraine’s currency, the hryvnia, Reuters added.

However, questions have been raised about the reported figures. In an article published on Schiffgold.com on Wednesday, American financial commentator and stock broker Peter Schiff described the sale as “murky” and said it was unclear how Ukraine had sold so much gold. According to data from the World Gold Council and cited by Schiff, when Russia launched its military operation in Ukraine, the National Bank of Ukraine held about 27 tons of gold in its reserves, which was valued at just under $1.7 billion. In other words, Schiff writes, the central bank claims to have sold more than seven times its total bullion holdings.

Schiff goes on to explain that Ukraine could be tapping into domestic gold supplies held by commercial banks or other institutions, and there’s a possibility that other countries or private entities had given the country gold to sell.

Ukraine has been struggling to support its economy amid the ongoing conflict with Russia, with the government reportedly having requested to delay its foreign debt repayments by two years. The country’s GDP has been forecast to decrease by 30% this year.