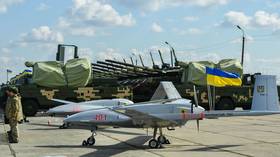 Kiev has so far lost 30 drones, 10 helicopters, four jets, three ships, and upwards of 50 troops in failed attempts to take Snake Island, the Russian Ministry of Defense has revealed. Urged on by British advisers, President Volodymyr Zelensky personally ordered the attack and wanted to see a victory by May 9, media reported citing security sources.

Another Bayraktar TB-2 strike drone, a Turkish import, was shot down over the island on Tuesday, said Major General Igor Konashenkov, the spokesman for the Russian military. That makes nine Bayraktars destroyed over Snake Island since Saturday, he pointed out.

Russian troops noticed on Tuesday three more bodies of Ukrainian attackers that washed up on the beach, Konashenkov added, for a total of 27 special forces and nationalist battalion personnel that perished on the island itself. 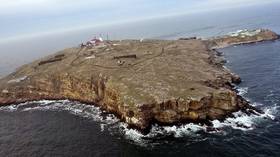 During Monday’s briefing about the fighting on the island, Konashenkov said that Ukrainian forces had lost three Su-24 bombers, one Su-27 fighter, four helicopters and three Centaur-class assault ships. On Tuesday, he clarified that three Mi-8 troop carriers and one Mi-24 attack helicopter were shot down on Saturday, while six more were later destroyed on the ground near Odessa, for a total of ten.

“This adventure has turned out to be a disaster for Ukraine,” Konashenkov said, adding that the “thoughtless PR action of the Kiev regime to take Snake Island by Victory Day” resulted in the “meaningless deaths” of more than 50 elite Ukrainian troops, as well as pilots and crew of the destroyed aircraft and vessels.

Konashenkov called the attempt to take the island a public-relations stunt, “mindless from the military standpoint.”

Zelensky personally ordered the attack, overruling the Ukrainian General Staff, a Russian military source told Sputnik. Another source told TASS that Zelensky’s order came at the urging of British advisers in Kiev. The purpose of the stunt was to claim a victory by May 9, and symbolically rain on Moscow’s parade celebrating the Soviet Union’s World War II defeat of Nazi Germany.


READ MORE:
Ukraine is winning the battle on Twitter, but in the real world Kiev is losing the fight for the Donbass

The strategically located island was taken by the Russian Navy in the first week of military operations. The Ukrainian government and media initially claimed that 13 brave defenders died after heroic resistance, only for the 82 border guards who had surrendered without a fight to turn up alive within days.