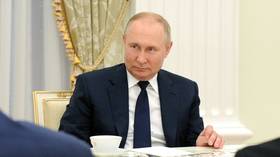 Russian President Vladimir Putin may have used a lookalike for his trip to Iran this week, the head of Ukraine’s military intelligence service (GUR) has suggested.

During an interview on Ukrainian TV channel TSN on Friday, Major General Kirill Budanov was asked to comment on Putin’s health during the Russian leader’s recent trip to Iran.

“I will not give you a direct answer, but will give you a hint,” Budanov replied. “Look, please, at the moment when the supposed Putin is leaving the plane. Is he Putin at all?”

Budanov did not elaborate, but Ukrainian media said he was referring to rumors that Putin occasionally uses lookalikes for public events. They also said that Budanov was talking about claims that Putin was limping while exiting the plane in Tehran.

While giving a speech in Moscow on Wednesday, Putin explained that he was coughing due to the strong air conditioning Tehran, where he had a number of meetings the previous day. The Kremlin later stated that the president’s health is fine.