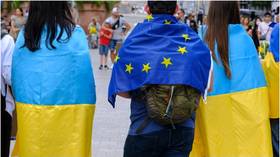 Ukrainian President Volodymyr Zelensky has set an “internal deadline” for Kiev to join the EU, the country’s foreign minister has said.

“Integration with the EU is like the work of a farmer: you have to go and work on the field every day, instead of hypothetical planning of how many years it would take,” Dmitry Kuleba told Forbes Ukraina magazine on Monday.

The minister said the country must focus on adjusting its legislation to comply with EU standards.

“But I will not tell you that,” he added, according to Forbes Ukraina.

The decision also depends on the European Union, and not only on us. If we voice a deadline, we could scare someone within the EU, making them deliberately stall everything tied to the European integration of Ukraine. Even if we implement 120% of all standards and directives, they will still stall. So everything must be done calmly, wisely and be aimed at achieving results.

At the same time, Brussels said Kiev must continue structural reforms, fight corruption and reduce “the persistent influence of oligarchs.”

Russian Foreign Minister Sergey Lavrov told the newspaper Izvestia on Monday that making Ukraine a candidate was “a part of the geopolitical gambit against Russia” and a way to “demand full solidarity with the EU with its anti-Russian actions.”