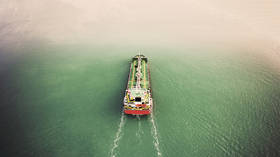 Ukraine is in discussions with the United States on purchasing and financing supplies of liquefied natural gas (LNG) instead of pipeline gas, which the country receives from Europe, Naftogaz CEO Yuriy Vitrenko said on Tuesday.

The head of the Ukrainian company told Bloomberg TV: “We would need to import gas worth up to $8 billion for the next heating season. And that’s exactly what we were discussing here in the United States, some financing for the US LNG that can replace pipeline gas that we have been traditionally buying in Europe.”

Vitrenko noted that Ukraine stopped direct purchases of Russian gas in 2015, increasing imports from Europe instead. “But since we are lobbying for a full embargo on Russian gas, we believe that US LNG is the best alternative that we are trying to buy at the moment,” he said.

The Naftogaz chief added: “In our case, US LNG can cover all our needs for imports. But if we look at a wider European situation, it cannot replace realistically in the short-term supplies from Russia.”