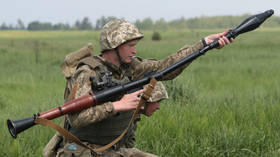 A Bulgarian-American from Missouri stood to make more than $2 million from brokering an arms deal with Ukraine, until the New York Times ruined it by warning the authorities his paperwork was’t quite right. According to the story published on Thursday, Martin Zlatev sought to sell Kiev weapons and ammunition made in Bulgaria and Bosnia-Herzegovina, which officially do not allow such trade.

After Zlatev’s limousine business in St. Louis was ruined by Covid-19 lockdowns, he partnered with local osteopath Heather Gjorgjievski to profit from the “shadowy market” of private arms deals, according to the Times.

Their company, BMI, made several deals with the Ukrainian government. One involved 2.2 million rounds of US ammunition, worth $25 million. Two more contracts, worth about $5 million, were for 540 RPG anti-tank weapons and 22 mortars coming out of Bosnia, as well as 900 surface-to-air missiles from Bulgaria. All shipments would go through Poland before being taken into Ukraine by truck.

In order to get around the Bosnian and Bulgarian export bans, BMI planned to tell the governments in Sarajevo and Sofia that Poland was the weapons’ final destination, the Times reported, citing a letter Zlatev sent to Ukrainian procurement officials.

“The legality of using falsified records is murky, say lawyers and academics who work in the field,” the outlet noted. 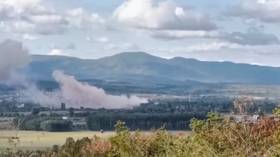 Zlatev and Gjorgjievski were acting as the middleman, using the fact that they had a US government license. President Joe Biden’s administration authorized over $300 million in private weapons contracts to Ukraine in the first four months of 2022. The approval process that normally takes weeks now takes “a matter of hours,” the Times noted. A letter from Zlatev to the Ukrainian defense ministry said they were approved in just seven days, down from the regular 60.

While the Times describes $300 million as “a pittance” compared to the $17.5 billion worth of weapons that the US has sent to Ukraine, the official government aid is supposed to have “stringent tracking requirements” – though Kiev has objected to attempts by some US lawmakers to implement these – while private sales have “less oversight.”

“It’s the Wild West,” Olga Torres, a lawyer who serves on the federal Defense Trade Advisory Group, told the Times. “We are seeing a lot of people who were previously not involved in arms sales getting involved now because they see the opportunity.”

Zlatev and Gjorgjievski, both in their 40s, stood to make more than $2 million off the Ukrainian deal. The Times insinuated they were also gouging Kiev in the process – charging 50% more than other vendors for bullets, and more than double the usual cost of RPGs. The deal, which was almost finalized, fell through when the newspaper contacted the Ukrainian government with questions.

Back in 2008, a pair of Florida 20-somethings were caught up in an arms trade scandal, after scoring a $298 million Pentagon contract to supply the US-backed regime in Afghanistan with ammunition. AEY Inc. tried to pass off Chinese bullets – sanctioned by the US – as made in Hungary, but got caught and both business partners ended up with federal convictions. Their story was fictionalized in the 2016 movie ‘War Dogs’.