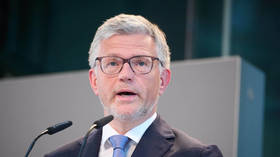 Ukraine’s ambassador to Germany, Andrey Melnyk, on Sunday blasted the lack of heavy arms supply from Berlin to prop up Kiev in its fight against Moscow, accusing German authorities of refusing to supply even “old” hardware to the country.

“German government cynically refuses to supply us even with old Leopard-1 tanks and Marder IFVs,” Melnyk stated in a social media post, branding such behavior a “disgrace that would go down in history.”

The remarks came a day after the chairman of the Ukrainian parliament, Ruslan Stefanchuk, visited Germany, apparently to rally support for deliveries of heavy arms. Speaking ahead of a meeting with German Defense Minister Christine Lambrecht on Friday, Stefanchuk said that the speedy “supply of the most modern equipment to Ukraine” would help to bring “common victory” over Russia closer. 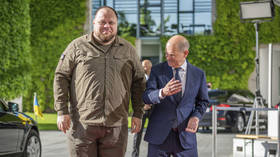 “I do not rule out receiving submarines from Germany, because we are ready to become the eastern defense frontier for the whole of Europe,” Stefanchuk stated. Later in the day, he reiterated Kiev’s expectations that Germany would provide it with both Marder armored vehicles and Leopard tanks, which Dmitry Kuleba, Ukraine’s top diplomat, described last month as Kiev’s “dream.”

Melnyk has repeatedly attacked German leadership over the purported lack of support from Berlin for Ukraine in the ongoing conflict with Russia. He also launched a bitter personal attack on German Chancellor Olaf Scholz over his refusal to visit Kiev to show solidarity with Ukraine.

“To play an offended liverwurst doesn’t sound very statesmanlike,” Melnik said as Scholz refused to visit Kiev, citing Ukraine’s own decision to snub German President Frank-Walter Steinmeier mid-April. While Steinmeier was set to visit Ukraine’s capital alongside other top European politicians, the Ukrainian authorities said he was “not wanted” there, accusing him of fostering overly good relations with Moscow.