So far, Kiev has erected three kilometers of heavy concrete fencing at some 1000 km-long frontier 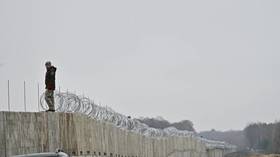 Kiev has begun building a wall on its border with Belarus, President Vladimir Zelensky’s deputy chief-of-staff, Kirill Timoshenko, announced on Friday. The reinforced concrete barrier, earthworks and other fortifications are currently being erected in the western regions of Volyn, Rovno and Zhytomyr.

“About 3 km of the border has already been arranged, the work is ongoing. This is not all, but we will not reveal the details,” Timoshenko wrote on his Telegram channel.

Since the border between the two countries stretches for over 1000 km, the barrier covers only a tiny fraction of it. At the same time, a vast part of the border runs over rough terrain, such as bogs and rivers, and constructing a wall along the entire distance is likely not needed.

The Belarus wall construction plans began circulating in Ukraine last year, with top Kiev officials citing illegal migration and presence of Russian troops in the neighboring country. Kiev has repeatedly accused Minsk of being a party to the conflict with Moscow, as it provided logistical support to Russia and hosted its troops. Belarus, however, has rejected the accusations. 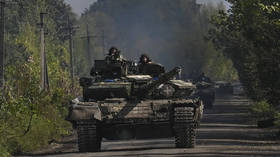 Last December, the chairman of the Ukrainian parliament, Ruslan Stefanchuk, said the wall’s cost was estimated at about 17 billion hryvnia (over $622 million at the time).

The new wall-building endeavor echoes another attempt by Kiev to reinforce its frontier with Russia, which has run since 2015 and effectively ended with the start of the ongoing conflict. The project, commonly known as ‘The Yatsenyuk’s Wall’ after then-PM of the country Arseny Yatsenyuk, has been plagued by allegations of widespread corruption and overall sloppy pace in the media, with the fortifications never getting completed.