Britain could be facing a bottle deficit due to soaring energy costs, the largest wholesaler says 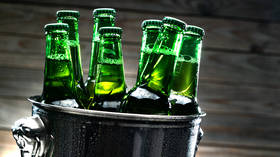 Britain could soon be hit by a bottled beer shortage as glassware production costs soar, according to leading Scottish wholesaler Dunns Food and Drinks. Suppliers are already starting to struggle with a glassware shortage after prices skyrocketed by 80% over the past year due to rising energy costs.

“Our wine and spirits suppliers from around the globe are facing ongoing struggles that will have a knock-on effect,” said Julie Dunn, the operations director at the company. “As a result, there could be less variety in the bottled beers we see on UK shelves,” she added.

According to Dunn, some brewers may be forced to switch to different containers for their products, which could further push prices up for consumers. “Specialist bottles and glassware hold a very important place in the heritage of the beer industry and I expect that while some breweries will convert to cans to ensure consistent supply, others will look at this as devaluing the brand, so will inevitably pass the additional cost on to beer drinkers,” she said.

Some Scottish brewers have already switched to cans in order to drive down rising packaging prices. Thus, Edinburgh-based Vault City Brewing said it would be selling almost all of its beers in cans instead of bottles from next month.

Beer is the most popular alcoholic drink in the United Kingdom, with consumers having spent more than £7 billion ($8.75 billion) on the beverage in 2020.

The German beer industry has also earlier warned that its small- and medium-sized breweries are likely to bear the brunt of glassware shortages.