Consumer prices rose 9.4% in June amid the worsening cost of living crisis 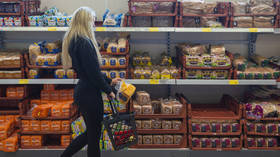 Inflation in Britain accelerated at a faster pace than expected in June and hit 9.4% year-on-year, the highest increase since February 1982, according to data released by the Office for National Statistics on Wednesday.

The Consumer Prices Index was expected to rise by 9.3% in June, from 9.1% in May. Prices for motor fuels and food made the largest upward contributions to the change, the UK’s statistics body said.

According to its figures, the annual increase for transport was 15.2%. The prices of food and non-alcoholic beverage surged by 9.8% from a year ago, the most since March 2009.

Last month, the Bank of England forecast inflation to peak at 11% in the autumn, and it reportedly plans a half-point interest rate hike in August, after a quarter of a point increase in June.