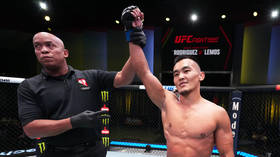 The UFC has announced that it will conduct an investigation into claims of suspicious betting patterns surrounding a featherweight bout promoted by the fight league in Las Vegas last weekend.

Chinese fighter Shayilan Nuerdanbieke scored a first-round TKO finish against American rival Darrick Minner after just 1:07 of the opening frame inside the organization’s Apex facility on the main card of an event last Saturday night.

The finish to the fight came after Minner appeared to injure his left leg early in the contest, prompting Nuerdanbieke to take the fight to the canvas and unleash a barrage of strikes before the referee stepped in.

However, it was noted afterwards by several analysts on social media that the betting line swung rapidly in the hours before the fight and made Nuerdanbieke the overwhelming favorite to win the fight inside the first round.

Further significant money was placed on Nuerdanbieke in the lead-in to the fight, even as the odds shortened and made the bet significantly less attractive to potential bettors – with the implication being that news of Minner’s injury had been leaked to prospective bettors, or even that the finish of the fight had been fixed.

However, no such determinations have yet been made.

The large amount of money being placed on the fight, though, alerted oddsmakers to potential betting irregularities, particularly as such a torrent of gambling interest in the fight was not expected given that it was not considered to be a particularly high-profile contest – with some even removing the match from their sportsbooks.

The situation prompted intervention by US Integrity, a Las Vegas-based watchdog which oversees gambling in Nevada alongside state regulators, who quickly alerted bookmakers about the concerning betting patterns.

“We hope that by [alerting clients] a couple hours before the fight started, we may have helped prevent some more suspicious bets from getting through,” Matthew Holt, president of US Integrity, told ESPN.

And referencing the matter for the first time on Monday, the UFC pledged to look into the claims of irregular betting patterns, but added that it doesn’t believe any of the fighters or their respective teams acted in an irresponsible manner.

“Like many professional sports organizations, UFC works with an independent betting integrity service to monitor wagering activity on our events,” the UFC announced.

“Our betting integrity partner, Don Best Sports, a leading global supplier of real-time betting data for North American sporting events, will conduct a thorough review of the facts and report its findings. At this time, we have no reason to believe either of the athletes involved in the bout, or anyone associated with their teams, behaved in an unethical or irresponsible manner.”

The scandal comes just weeks after UFC fighters were notified of a policy change within the organization which now prohibits fighters from betting on the outcomes of fights.