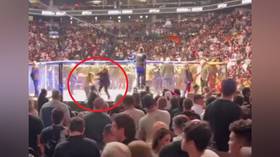 An MMA enthusiast has gone viral for her ill-advised attempt to storm the octagon following the main event at UFC 274 on Saturday.

The card at Phoenix's Footprint Center was headlined by hometown favorite Justin Gaethje, who attempted to clinch the vacant lightweight belt after former champion Charles Oliveira failed to make the 155-lbs limit and was stripped on the scales the day before.

Filmed after Oliveira finished the bout in the first round via an impressive submission, the clip already seen over a million times on Twitter and originally shared on TikTok shows a clearly inebriated young woman identifying herself as "Miss Maggie" and informing her audience of what she is about to try and pull off.

A man nearby tells her "Go, go, girl" until the woman sets off on her way to claps and cheers. Hopping up to the perimeter of the Octagon, she is then stopped from being able to scale it as a member of security pushes her away and launches the attention seeker into orbit.

"Oh sh*t!" says the man who had previously encouraged her, with the girl criticized online for having "no end game" in her poorly-thought out plan.

The New York Post reported that the girl was "dazed for a few seconds" and also tried running toward a tunnel in the arena.

Then stopped and seated in a chair, she was taken away as two-time title challenger Gaethje left the floor.

To MMA Fighting, an official representing arena security said the fan was attended to by medical staff and wasn't injured.

"It was swiftly dealt with and she was ejected from the arena," the official confirmed.

Also in the comments section of the viral clip, a member of the public who seems to work for Texas-based Executive Protection Concierge Security Solutions said that the company was "very proud of having great female agents on our team like the one you saw in the video."