Charles Oliveira is no longer the UFC lightweight champion 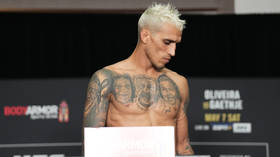 Charles Oliveira, the man who succeeded Khabib Nurmagomedov as UFC lightweight champion, has been stripped of his world title after he failed to make weight ahead of his UFC 274 title defence against Justin Gaethje in Phoenix, Arizona scheduled for Saturday night.

Oliveira came in a half pound over the championship limit of 155lbs when he stepped on the scales on the eve of the fight, with UFC officials announcing soon afterwards that the world title would be vacated as a result.

The UFC 274 main event fight will go ahead as planned, though only Gaethje remain eligible to win the championship. In the event that Oliveira wins the fight, he will immediately become the top contender and will contest the vacant world title with another fighter yet to be determined at a later date.

The situation was further complicated by allegations from other fighters on the card that the weighing scales used by fighters in the hotel on the eve of the weigh-ins had been reset overnight and was potentially displaying inaccurate readings.

Oliveira had posted to social media on Thursday night that he was on weight ahead of the title fight, and appeared confused when it was announced that he was over the championship weight limit.

The Brazilian fighter was given an extra hour to lose the remaining half pound but was unable to do so, prompting the UFC to vacate their lightweight world title.

It was the first time in the history of the UFC that a fight lost a world championship on the weighing scales.

“We went to sleep on weight, we checked the weight on the scale the organization leaves for us downstairs and everything was OK,” he said.

“When we checked it in the morning, [his weight] was off. We even posted last night that he had made weight because that’s what really happened. You’re witnesses of this, Charles has never missed weight since he moved up to 155. Even when there was no belt [on the line], he was under the limit, he didn’t use the pound allowance.

“If I keep saying it, people will think it’s an excuse, but that’s the truth. We even posted last night he made weight well. He made weight and went to bed.”

Oliveira's opponent, Justin Gaethje, countered these claims, however, saying that the excuses put forth by the Brazilian's team didn't add up, and that three of the four fighters taking part in world title fights all successfully made weight.

“3/4 made championship weight. Cut the BS,” he wrote on Twitter.

But as far as Oliveira is concerned, the late drama won't change what will happen in the cage.

“These things happen,” Oliveira said through his translator. “You can’t explain God. The champion has a name and it’s Charles Oliveira and I’m going to shock the world tomorrow.”