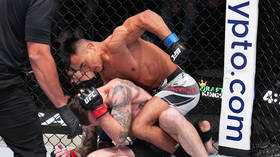 A recent UFC fight between Darrick Minner and Shayilan Nuerdanbieke is under investigation after suspicious betting activity was noted by several US-based sportsbooks, according to ESPN.

China’s Nuerdanbieke was victorious against American fighter Minner, winning last Saturday’s fight at the UFC's Apex facility outside Las Vegas by TKO just after the one-minute mark in the first round – however, it was noted by several oddsmakers that an unusual amount of betting activity was taking place in the hours before the fight to back Nuerdanbieke winning with a first-round finish.

This prompted several sportsbooks to cease taking money on the fight, per U.S. Integrity – a firm that monitors betting activity alongside state gambling regulators in Las Vegas.

In the hours before the fight rumors appeared online which suggested that Minner was injured leading to the odds of an early victory by Nuerdanbieke being slashed.

The rumors appeared to be legitimate when Nuerdanbieke landed an early body kick which prompted a visible reaction from Minner. The Chinese fighter quickly applied pressure and ended the bout via TKO after a barrage of blows on the ground just 1:07 into the first round.

U.S. Integrity was subsequently notified by several different sportsbooks of suspicious betting patterns which intensified even after the odds became significantly less attractive for bettors.

“Our goal as always is to notify the industry of any potential nefarious, abnormal or suspicious activity as soon as possible, so they can take action as quickly as possible,” Matthew Holt, president of U.S. Integrity, told ESPN.

“In this case, we hope that by sending a couple hours before the fight started, we may have helped prevent some more suspicious bets from getting through.”

The situation comes just weeks after the UFC notified its fighters that newly-adopted rules meant that they were now not permitted to bet on the outcome of UFC fights, with the organization’s chief business officer Hunter Campbell telling athletes in a memo that the decision was made “in light of clear direction that we have received from regulators responsible for the regulated sports betting industry in the United States.”

The report by ESPN further states that some sportsbooks are of the opinion that Minner threw the fight, while others are suggesting that news of his supposed injury was leaked and that it was determined by gamblers that he was too severely injured to be competitive in the fight.