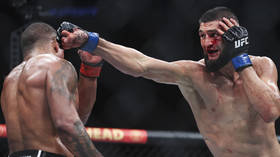 UFC boss Dana White has hit out at claims that longtime veteran Nate Diaz is being marched to a slaughterhouse in his upcoming main event fight with undefeated Chechen-born sensation Khamzat Chimaev.

Diaz, who owns victories against the likes of Conor McGregor, Anthony Pettis and Donald 'Cowboy' Cerrone, has just one fight remaining on his current UFC deal and had been vocal in his desire for the promotion to fulfil its part of the bargain so he can test free agency, and potentially pursue the boxing match with social media star Jake Paul that he has been openly flirting with online.

However, more than a year after his last outing in the cage (a decision defeat against top contender Leon Edwards), Diaz finally got the bout agreement contract he had been clamoring for – but many an eyebrow was raised when it was revealed that Diaz, who has lost three of his last four in the Octagon, would be tangling with the surging Chimaev in the UFC 279 main event next month.

Several prominent MMA personalities turned up their noses at the fight – perhaps most notably former double-champ Daniel Cormier, who bemoaned the contest as a “mismatch” and former UFC lightweight (and Diaz opponent) Josh Thomson, who said: “The UFC knows what they're doing, this happens all the time. When you're on your way out, they give you the toughest, hardest fight they know stylistically it does not match with you. Chimaev is the worst matchup he could potentially get.”

White, though, isn't buying this narrative.

“Well, the people that are saying that obviously didn't read when Nate said, 'I asked for this fight',” he said to TMZ.

“It's true and he also asked for [heavyweight champion] Francis Ngannou. So, if I was putting him out to get slaughtered, Francis Ngannou would probably be the fight to give him.”

But when probed as to whether or not he could convince Diaz to ink a brand new UFC deal, White didn't appear overly confident. 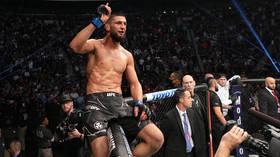 As of now, Diaz seems intent on severing ties with the UFC; an organization he has represented since 2007. But before that happens, White says that fans will appreciate what he and Chimaev bring to the cage on September 10.

Diaz has once already scuppered UFC plans when he coaxed a tap from Conor McGregor in their first fight in 2016 – and if he does this again against the seemingly invincible Chimaev, it would be the one of the most significant results in recent MMA history.

And one might even say, the most perfect parting gift that regular rabble-rouser Diaz could offer to his soon-to-be previous employers.