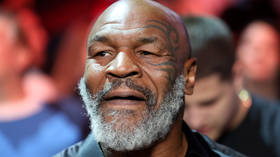 Fans have expressed concern for boxing legend Mike Tyson after the former heavyweight champion was seen being transported through a Miami airport in a wheelchair.

Tyson, 56, returned the boxing ring in late 2020 to take on fellow icon Roy Jones Jr. in a highly-publicized exhibition match during which the man who was once the youngest heavyweight champion in history rolled back the years and showed that very little of his trademark power has deserted him since he hung up his gloves in 2005.

But despite various promises to take on more exhibition matches, he has yet to lace up his gloves again – and there are concerns that Tyson's days in the ring are finally behind him after concerning images of the star found their way online showing the legendary fighter looking slightly worse for wear in wheelchair at Miami International Airport.

The images come three weeks after Tyson was spotted looking unsteady on his feet in New York, and amid reports that he is suffering from a flare-up of sciatica in his back.

However, he seemed to be in good spirits and was seen posing for selfies with fans.

The photos come a month or so removed from Tyson suggesting on his podcast that his “expiration date” was fast approaching.

“We’re all gonna die one day of course,” he said on his podcast, Hotboxin'.

“Then, when I look in the mirror, I see those little spots on my face, I say, ‘Wow. That means my expiration date is coming close, really soon.’ ”

But if fans are overly-concerned as to Tyson's health in recent months, he did display that he has what it takes to dispatch an unruly fan – after he was filmed on a flight repeatedly striking a fellow (and allegedly drunk) passenger who had reportedly been verbally abusing him for a prolonged period of time.

“Remember when he was talking about a comeback? He's old like the rest of us,” wrote one fan in response to the images.

Another, though, served up a warning: “Please don't tell me that he is ending up like Muhammad Ali.”