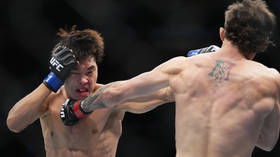 Across a stacked card that boasted many an epic fight and upset, a rare double knockdown from two featherweights in the preliminaries at UFC 281 set tongues wagging on Twitter.

Just 20 seconds into their scrap, Choi and Trizano knocked each other down at exactly the same time in what proved a crazy precursor to a wild first round out of a scheduled three.

Fighting for his career in the UFC while on the last bout of his contract, Trizano, who had also missed weight, landed a brutal KO on Choi with seconds left to spare in the first round.

As for the “ultra rare” double knockdown, though, that received far more attention.

“I can’t believe that just happened,” said an MMA reporter on Twitter.

“Imagine if it was a double KO,” another concluded.

“How is it possible we’re not even two minutes into Seung Woo Choi vs. Mike Trizano? So much has happened!” said another MMA journalist, between the fight’s two main incidents.

Speaking after his win as he improved to 11-3, Trizano, who was 1-3 in his last four fights coming into this one, told commentator Joe Rogan: “I was not going to be denied.” 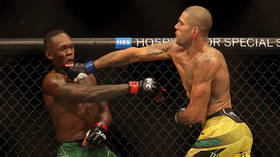 “I was going to go out on my shield, or carried out of here, I don’t care,” he claimed.

Choi slumped to 10-6 with his defeat and could also be on the outs in the elite MMA promotion after now dropping his last three fights.

If this is the end of the road for him, at least Choi left his mark in UFC history with a highlight-reel freak occurrence that should be remembered for good.