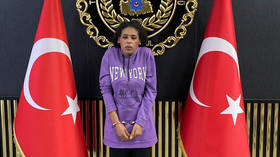 Turkish authorities have released images of a woman, arrested for allegedly planting a bomb that killed six people and injured 81 in Istanbul on Sunday. Ankara has accused Kurdish militias in Syria of masterminding the plot.

The arrest was announced earlier on Monday by Interior Minister Suleyman Soylu, who said the suspect was arrested in a hideout by Istanbul police.

Images shown by Turkish media include footage of the police operation, showing the suspect and several other individuals being detained and escorted by armed officers. There were also several photos showing her face.

Suleyman Soylu said the organizer of the bombing was captured in the police roundup, before he could flee the country, and that those above him will be unhappy as they wanted him dead. The minister said a total of 46 people were taken into custody in the wake of the explosion.

The Sunday bombing occurred on the iconic Istiklal Avenue, one of Istanbul’s main tourist hubs. The Russian Consulate General, which is based in the city, said on Monday that according to updated reports, three of the people injured in the blast were Russian nationals. Their lives are not in danger, the statement said.