The Turkish state gas importer seeks to hold off some payments to Russia until 2024, sources told the outlet 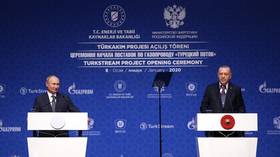 Turkish state-run gas importer Botas is considering asking Russia’s Gazprom to grant a delay on some of Ankara’s due payments for natural gas until 2024, Bloomberg reported on Monday.

According to Bloomberg, Türkiye is yet to make a formal request for a payment reprieve, but discussions were held between officials. If granted, the deal would help alleviate the pressure on the country’s economy amid a period of high global energy prices. Ankara runs a trade deficit of over $11 billion and has experienced a depreciation of its national currency, the lira, the report noted.

A Turkish source cited by Russia’s RIA Novosti on Tuesday said the discussion was about pricing rather than any proposed payment delay. The partial use of the ruble in trade changed the terms of the contracts, and the parties are discussing how it could impact the price of the product, the source explained.

The two nations previously agreed to switch 25% of their trade in natural gas to Russian rubles, shifting away from the US dollar. Moscow has branded the leading Western currency “toxic” due to the control that Washington has over it, and its willingness to use it for political leverage.

Hungary, another major buyer of Russian energy, announced on Monday that it had reached a conditional agreement on postponing its due payments for winter gas supplies.

“We agreed on a threshold value, and the part exceeding this we don't have to pay for now, but it goes into deferred payment,” Development Minister Marton Nagy told Reuters.

The official said the threshold was set below the current spot price of gas, and the arrangement would last till March. He estimated that Hungary would be able to defer as much as €1 billion ($990 million) in payments.