The suspects allegedly sought to flee to neighboring Syria 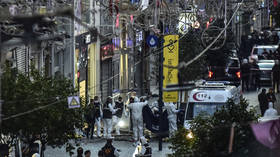 A woman suspected of dropping a backpack bomb on a busy pedestrian street in the historic center of Istanbul on Sunday has been detained, along with nearly two dozen other suspects allegedly linked to “Kurdish terrorists,” Interior Minister Süleyman Soylu announced early on Monday.

The Sunday blast on the iconic Istiklal Avenue in Istanbul killed six people and left 81 injured, according to the latest tally. Five of those injured are in intensive care, including two in critical condition.

“The person who had dropped the bomb was detained by our Istanbul Police Department teams,” Soylu told journalists after inspecting the blast site. The Interior Minister said the people who carried out the attack were likely linked to the Kurdish PKK/PYD groups, according to broadcaster TRT Haber.

Besides the alleged perpetrator, at least 21 persons of interest had been detained and questioned, leading to a preliminary “assessment that the order for the action came from Kobane” – a Kurdish-majority city right across the border in northern Syria. The suspects “gave their statements about where they would go if they were not caught,” he explained. 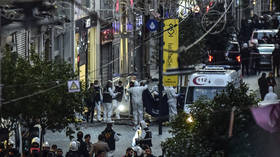 The Kurdistan Workers Party (PKK) waged a decades-long guerrilla war against Türkiye and is considered a terrorist organization by the EU. It recently became a major bone of contention, as Türkiye accused Sweden and Finland of harboring members of the PKK and other groups it considers to be terrorist organizations, and threatened to block their bids for NATO membership.

“The insincerity of our so-called allies who send them official money from their own senates is probably obvious,” Soylu said, without calling anyone out specifically. He psomised that those who inflicted such pain on the Turkish people will “experience many times the pain… in the near future.”

Turkish President Recep Tayyip Erdogan condemned the “treacherous attack” earlier on Sunday and vowed to bring those behind the blast to justice.

The Istanbul Chief Public Prosecutor’s Office opened a terrorism probe into the incident, while authorities have urged the media and public to rely only on official information about the incident. Officials also banned news channels and social networking services from sharing images of the deadly explosion.