Home Iz minuta u minut Turkish inflation out of control

Turkish inflation out of control

The 70% spike is attributed to rising energy prices 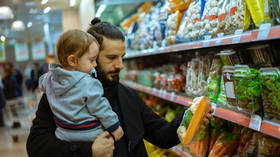 Consumer prices in Turkey soared by 69.97% in April compared to the same month last year, according to official data released on Thursday. Inflation has soared amid rising energy prices against the backdrop of the Russia-Ukraine conflict and due to a lira crash late last year.

The figure, released by the Turkish Statistical Institute, exceeded the central bank’s estimate of 68% and represents the steepest increase in two decades. Month-on-month, consumer prices rose 7.25%. Food prices have risen by 89% since last year, and transportation costs by 105.86%. According to the data, the annual core inflation was 52.37%.

The government hopes that the rising cost of living – fueled by increased commodity prices attributed to the Ukraine conflict – will begin to slow down after May.

Turkey imports 93% of the oil and 99% of the gas it consumes. Sanctions piled on Russia’s energy sector over the conflict in Ukraine and other geopolitical factors have led to a worldwide rally of oil and gas prices.

The Turkish lira lost 44% of its value against the US dollar last year after Turkey’s central bank cut interest rates by a full percentage point in November – the third cut since September – and signaled it would slash rates again in December, in an attempt to curb rising inflation.