Turkey warns rival against ‘dancing’ with it

Turkey has withdrawn from dialogue with Greece, the country’s president Recep Tayyip Erdogan said on Wednesday, a few days after saying that the Greek prime minister Kyriakos Mitsotakis “no longer exists” for him.

Erdogan accused Mitsotakis of sabotaging efforts to resolve long-running disputes and of trying to block deliveries of F-16 fighter jets to Turkey during a recent visit to the US. Greece considers Turkey’s plans to upgrade its fighter jet fleet as a threat to security in the eastern Mediterranean. This dispute is not the only point of contention between two countries, which also have conflicting claims over air space, the island of Cyprus, and the status of several islands in the Aegean Sea, among other things.

In an address to lawmakers from his ruling party, Erdogan announced that Turkey had left a High-Level Strategic Council agreement, which was sealed in 2010 and has served as a bilateral cooperation platform since then.

“By canceling the agreement, we will no longer hold bilateral talks with them (Greeks),” the Turkish leader said. 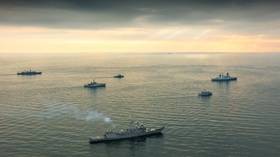 Accusing Greece of “setting up shows” with planes, Erdogan warned it by saying: “Pull yourself together. Do you not learn lessons from history? Don’t dance with Turkey. You’ll get tired.”

Over the last years Turkey and Greece have been constantly accusing each other of airspace violations.

Erdogan's remarks came after the Greek prime minister pledged to inform the EU of Turkey’s “aggressiveness” and “provocations,” which pose, in his opinion, a significant threat to regional stability.

Athens and Ankara held 60 rounds of talks between 2002 and 2016. The negotiations between the sides resumed last year after a five-years-long break but since then have seen little progress.