Consumer prices rose by 73.5% year-on-year in May 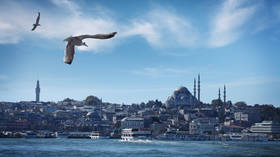 The Turkish government hopes to slow down the country’s staggering inflation rate and bring it to just under 50% by year end, the Milliyet newspaper reported on Monday.

One of the government’s “most important goals” is to ensure “a permanent decrease of inflation rates,” the publication quoted Minister of Treasury and Finance Nureddin Nebati as saying. Nebati added that Ankara’s aim was for inflation to drop to 48-49% by the end of this year.

Last month, inflation in Turkey rose by 73.5% year on year, according to data from the country’s statistics agency. Food prices jumped 91.6%, as the country grapples with soaring consumer product and energy costs.

Nebati said the government inflation forecast for the end of 2023 stood at 19.9%, and suggested that the Central Bank planned to keep its interest rate unchanged.

President Recep Tayyip Erdogan has repeatedly spoken out against raising the interest rates, claiming that it causes inflation, contrary to what economists generally say. The central bank has kept the key interest rate at 14%.

The country’s currency, the Lira, shed 44% of its value last year, becoming one of the world's worst-performing currencies.