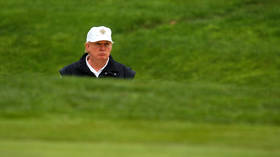 Former US President Donald Trump has advised golfers to join the Saudi-backed LIV golf league ahead of its next event at his Trump National Golf Club Bedminster in New Jersey.

"All of those golfers that remain ‘loyal’ to the very disloyal PGA, in all of its different forms, will pay a big price when the inevitable MERGER with LIV comes, and you get nothing but a big ‘thank you’ from PGA officials who are making Millions of Dollars a year," Trump warned on Truth Social.

"If you don’t take the money now, you will get nothing after the merger takes place, and only say how smart the original signees were," he claimed.

Trump's advice comes despite the 9/11 Justice group criticizing players that have already jumped ship, and also sending Trump a letter asking him to reconsider his support for the tour as they believe that the Saudi government was complicit in the 2001 attacks on American soil.

"The Saudi nation is largely responsible for the death of our loved ones and for the horrific attack on America. And you know it," said 9/11 Justice in the document. 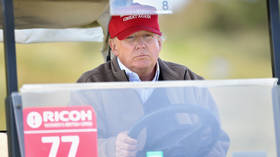 "The former President correctly speculated in 2016 that Saudi Arabia knocked down the [twin] towers and now the FBI has released the documents to prove him right," noted the son of a victim of the attacks, Brett Eagleson, to CNN when blasting Trump.

"Yet he is choosing money over America. So much for America First. A sad day."

The LIV's emergence on the golfing landscape has caused a civil war of sorts in the sport.

Backed by the Public Investment Fund that bought English Premier League team Newcastle United in November last year and is ultimately headed by the Crown Prince Mohammed bin Salman, the LIV Series is viewed as a breakaway league and is accused of being a 'sportswashing' exercise for the Saudi regime.

Meanwhile, the US Justice Department is looking into whether the PGA Tour has been guilty of anti-competitive behavior amid its falling-out with the LIV. 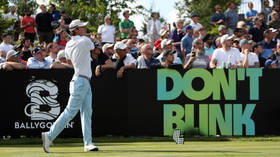 Reacting to 9/11 Justice's letter, the LIV claimed that the victims' families "have our deepest sympathy".

"While some may not agree, we believe golf is a force for good around the world," it added in a statement.

While the likes of Tiger Woods and Rory McIlroy have been critical of the LIV, fellow former major champions including Phil Mickelson, Dustin Johnson, and Sergio Garcia have willingly signed up to the project headed by CEO Greg Norman.

As communicated by the wording in Trump's outburst, he too has had his own issues with the PGA.

Last year, after the US Capitol was stormed by his supporters who refused to accept current American leader Joe Biden's win at the polls in the 2020 general election, the PGA Tour went back on its decision to have his New Jersey course Bedminster host this year's PGA Championship. 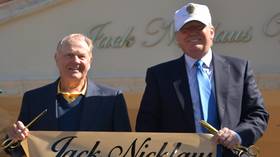 Furthermore, one of his others courses at Turnberry in Scotland has also been taken off the rotation list of potential hosts for the Open in the UK.

Bedminster has received the green light from the LIV, though, amid protests from the likes of Eagleson who pointed out that it is found "in the backyard of where 750 New Jersey residents were murdered [in the 9/11 attacks]" in reference to the attacks on the World Trade Center and its iconic Twin Towers.

The LIV Golf invitational at Bedminster will take place from July 29 to July 31 while contested by 48 players vying for a total $25 million in prize money.