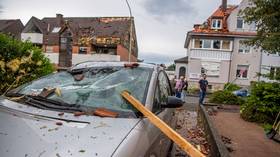 A massive tornado ripped through the western German city of Paderborn on Friday, blowing away roofs, breaking trees and damaging multiple vehicles. The twister, which was accompanied by heavy rain, injured at least 30 people in the city, local police said, urging residents to stay home.

“The storm caused 30 to 40 injuries, at least 10 of them are serious. The damage caused is not yet clear,” the police said in a statement.

Another video shows the extreme wind snapping trees in half, with broken trunks getting blown away at high speeds.

The storm has also affected the nearby town of Lippstadt, where more than 100 people were temporarily trapped in an open-air pool after fallen trees blocked the exit. The strong winds also toppled the steeple of a local church, imagery circulating online shows.

“Countless” buildings were damaged across Paderborn, with roofs partially or completely blown away, according to local officials. The tornado also heavily disrupted traffic, with multiple roads blocked by fallen trees, as well as smashed and overturned cars.

The inclement weather has also forced multiple public transport routes to close and halted traffic at a local railway line.