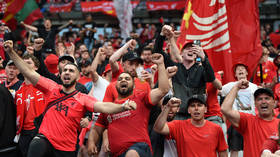 Hundreds of ticketless Liverpool fans allegedly managed to force their way into the Parc des Princes to see their team take on Real Madrid in the Champions League final as kick-off was delayed.

An estimated 50,000 Reds supporters have stormed the French capital Paris as their club aims to lift the European Cup for a seventh time and stop their La Liga opponents from securing a record 14th triumph in club football's elite competition.

According to RMC, however, those without means of entering France's national stadium legally have managed to get past the police at the gate in a major security breach echoing scenes before England's Euro 2020 final loss to Italy at Wembley last summer.

The French outlet said that Liverpool fans "overwhelmed" police at Gate U "for a period of several minutes".

And while footage is yet to emerge of big groups trying to force their way in, Spanish media shared a video of some fans claiming over a security fence and then sprinting up the stadium's steps.

Elsewhere on Twitter, Paris Police issued a warning to ticketless football enthusiasts not to "force entry" to the match.

Fans with tickets have complained of an "absolute shambles" getting into the ground and urged European football governing body UEFA to look into the matter.

One Liverpool supporter uploaded a photo of masses of fans packed under a bypass where he claimed they had been waiting for one hour while spending almost two hours getting into the Parc des Princes.

As the clock neared 9pm in Europe, which was meant to be the match's start time, The Independent reported that kick off would be delayed with an official announcement in the stadium stating this was "due to the late arrival of fans".

This message, widely criticized as an attempt to deflect the blame for organizational shortcomings, was also shown on the big screens inside the stadium with a new kick-off time set to be announced in 15 minutes.

In quick succession, BT Sport in the UK relayed tales of groups of fans including women and children allegedly being teargassed by French police.

As kick-off was moved back to 9.30pm local time, the teams returned to the pitch for a second warm-up as there were still accounts of matchgoers struggling to get into the Parc des Princes.

Once Camila Cabello had completed a pre-match show, though, the action finally commenced as promised around 40 minutes late.