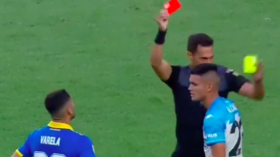 Sunday’s Champions Trophy final in Argentina ended early after referee Facundo Tello, who is due to officiate at this month’s World Cup in Qatar, showed an incredible ten red cards in the match between rivals Boca Juniors and Racing Club.

Boca were issued with seven red cards, including two to players on the substitutes bench, while Racing Club had three players dismissed in a heated contest which exploded late into extra time after Carlos Alcaraz scored what proved to be the winning goal with two minutes remaining.

Alcaraz’s late strike was the flashpoint which stoked the chaos on the pitch after several Boca players objected to him celebrating the goal in front of their supporters. He was surrounded by some of the players while others threw the ball at him.

Alcaraz was subsequently sent off along with five Boca Juniors players. An unused substitute and a player who had been subbed off earlier in the game were also among those dismissed.

Jonathan Galvan, an unused Racing Club substitute, was another who was given his marching orders.

The spate of red cards came after Boca’s Sebastian Villa and Racing’s Johan Carbonero had been sent off in the 95th minute after a heated argument on the pitch.

Another player, Boca’s Alan Varela, was also red carded five minutes after that.

The match was abandoned with just minutes remaining on the clock due to FIFA rules which state that teams cannot have fewer than seven players on the pitch.

It was Racing Club, though, who had the last laugh as their 2-1 lead at the time, which came courtesy of Alcaraz’s late but hugely controversial goal, proved to be the difference between the two teams.

It remains likely that the Argentine football authorities will punish both teams for their respective roles in the ill-disciplined game.

Referee Tello has a reputation for being a strict disciplinarian in Argentine football, having shown an incredible 612 yellow cards and 45 red cards in just 118 matches in South American football.

But as card-happy as he was, Tello still doesn’t hold the record for the most red cards shown in a match – and not even the most ever seen in Argentine football.

That record goes to the official in an Argentine fifth-tier match between Claypole and Victoriano Arenas in 2011 when, after a testy encounter, the referee entered each team’s dressing room following the match to send off every player from both teams.

The final number when all was said and done? 36 red cards.